A post by Lillian Stevenson, Academic Services Manager and Law Librarian based on information supplied by Bill Hines 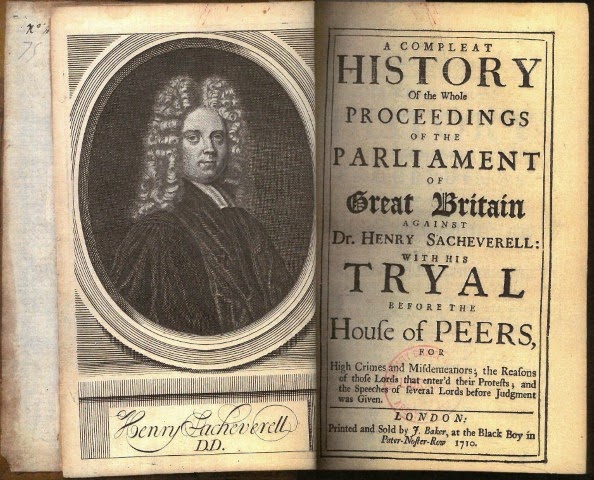 Henry Sacheverell (1674-1724)
Sacheverell was a clergyman and politician who helped to bring the downfall of the Whig government with a sermon preached in St Paul’s Cathedral in November 1709. His trial was a major event. Aberystwyth University Library holds extensive accounts of the proceedings, along with a volume of Horace which was owned and annotated by Sacheverell while he was a student at Oxford in the 1690s.

Sacheverell asked that all his papers and books be destroyed after his death so few now remain and we are lucky to hold a volume which was actually in his ownership. This is a copy of Horace published by Swalle in 1690, with significant annotation in Sacheverell’s hand. Sacheverell’s 1709 sermon in St. Paul’s Cathedral – “On the perils of false brethren” led to his trial for sedition and we hold several reports of the case – including that in the State Trials series. The trial helped to bring down the Whig government of the day and provoked riots in London and even in Powys, Wales.  Simon Harcourt, one time Attorney General and Lord Chancellor, acted as counsel for Sacheverell until his election as MP for Cardigan. By chance we also hold books belonging to two bishops who were involved with Sacheverell. Henry Compton, Bishop of London, was a prominent supporter. Compton had earlier signed the letter inviting the future William III to come over to England and later crowned him – so has some significance in the development of our current UK constitutional settlement. William Talbot, then Bishop of Oxford , was one of those supporting the impeachment of Sacheverell when the matter was discussed in the House of Lords in March 1710.