This year we will do a series of posts introducing you to the members of the Academic Services Team. This time it is the librarian for Biological, Environmental and Rural Sciences (IBERS); Geography and Earth Sciences; and Sport and Exercise Science. 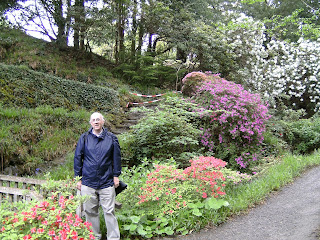 My name is Steve Smith.  I joined AU Information Services in April 2008 following the university’s merger with the Institute of Grassland and Environmental Research, having been the IGER Institute Librarian on the Gogerddan campus since August 2000.  I now have general responsibility for coordinating IS support for sciences within the IS Academic Services Group, liaising directly with IBERS, IGES and Sport & Exercise Science.   Additionally, I coordinate support to postgraduates and research staff across al departments.  Following a period as Site Librarian at Thomas Parry Library on the Llanbadarn Campus from August 2010, I will be based at the Hugh Owen Library from August 2012 onwards.

Having graduated in Agricultural Botany at Aberystwyth in 1978 and completing a Postgraduate diploma in Librarianship at Northumbria Polytechnic in 1979, I have fulfilled a number of posts as research librarian, mostly in the life sciences within the UK research councils. My return to Aberystwyth to work at IGER in 2000 followed a period of 22 years away.  While there were a few more shops and some of the traffic patterns had changed several times, my general impression was that the town had thankfully changed little in the intervening years, with its individual character (and characters), as well as its unique rural/seaside/academic mix remaining well intact.

Personal research interests include information transfer and dissemination techniques, citation analysis and extension support for scientists in the field.  Leisure interests include walking (hill, coastal and country), golf (hill, coastal and sometimes very wild country!) and comedic literature. I am currently reading and re-reading Jasper Fforde and Terry Pratchett.  My family are regular members of St Michael’s Church in Aberystwyth and I am a keen supporter of Yorkshire cricket.
Posted by Anonymous at 11:56