How “Aberystwyth” inspired Nelson Mandela and the African Liberation Movement

As the world celebrates the life and death of the “giant of history”, Tata Nelson “Madiba” Mandela, it is worth reminding our readers how the musical legacy of a son of Wales inspired Mandela and South Africa’s liberation movement. Dr Joseph Parry, a Professor of Music at Aberystwyth University, wrote the hymn “Aberystwyth” in 1879. It was this hymn which inspired Enoch Sontoga, a Methodist teacher who composed “Nkosi Sikelel iAfrika” (Lord bless Africa), to the tune of Parry’s “Aberystwyth” in 1897. Nkosi Sikelel iAfrika later became a symbol of African unity and the national anthems of South Africa, Zambia, Tanzania, Namibia and Zimbabwe.

The Joseph Parry Hall, near the Old College, was named after the composer and you can find works by him in our Celtic Collection in the Hugh Owen Library.

Did you know there was a version of Primo available for your mobile? 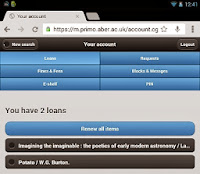 A lightweight version of Primo is now available at https://m.primo.aber.ac.uk/ this can be accessed from a variety of mobile devices such as smart phones or tablets, allowing you to connect to the library service while on the move.

The simple intuitive interface allows you to search for books, journal titles and DVDs from your phone or tablet. Extra features are available if you log on with your Aber username and password allowing you to renew books you have on loan, track fees and fines or check you library PIN.

Posted by acastaff at 09:43 No comments: