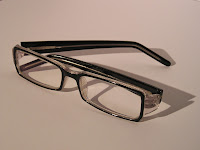 Other universities have been discovering the benefits of the Talis Aspire online reading list service
More news on the implementation of Talis Aspire at Aberystwyth Any changes to procedures will be added to the existing Reading list web page. Please feel free to contact the subject librarians with any questions you have: acastaff@aber.ac.uk
Posted by Joy Cadwallader at 17:08 No comments:

I’m Simon French and I’m the Library Graduate Trainee for the 2014/2015 session. The photograph is of me on a literary pilgrimage to Shakespeare and Company in Paris. As you can see, even when I’m on holiday I don’t want to stray too far from the books!
Books have always played a major part in my life. One of my earliest memories as a child was joining my local library. The first time I went in, I couldn’t believe my luck. I could have any three books that I wanted. Free! This was too good an opportunity to miss. Obviously I was going to make it worth my while and so I picked the three largest books I could find.  After nearly forty years my memory of that day is a bit sketchy but I distinctly remember that one of the books was called something like ‘Warplanes of the Third Reich’. It was a huge book, bound in blue cloth filled with technical diagrams and details along with silhouettes of the planes in question. I could barely lift it and quite what use it would have been to a small boy in 1970s rural Herefordshire is anyone’s guess, but I didn’t care. It was the size of the thing that mattered.
Yet my working life did not begin in a very bookish fashion. I started out selling polythene bags for a living but the excitement of that soon waned. I stuck it out for five years and then I threw in the thrills of the bag factory to go and pursue my first love – books. I studied for my BA and MA in English Literature at the University of the West of England in Bristol. I then got a job researching and cataloguing manuscripts and rare books for an antiquarian bookseller. Some six years later I struck out on my own path and for ten more years I bought and sold books for a living.